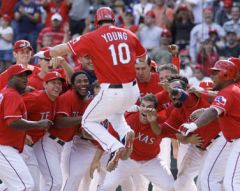 This is the year I can feel it. The year the Texas Rangers win the World Series. Each player is continuing to play well in the playoffs. They might not be a constant force in every game, but every player has stepped up. TV commentators have been forced to mention how well the Ranger's batting order plays and how there is no real "number 9" slot.

In a perfect world they will sweep the National League team, which will work out perfectly for my Game 4 tickets. The NL teams look like they will be good competition though so I will just hope for a good Game 4 to go to.

The Time is Now

A team that played team basketball has taken the 2011 NBA Championship. Congratulations are in order for the Dallas Mavericks as they put together a team of players that have tales of Finals lost but finally won their vindication tonight.

What Will the Future Bring

Will Kidd retire? Will there be any changes on the Dallas line up? I don't think anyone has a return trip for the Mavericks in their mind right now, but I believe it is possible. The team that had everyone in the media against them did what no one thought they could do. Go Mavs! See you in a few months!

I'm repeating myself here, but it is a new year after all. The Dallas Mavericks have proven to be very reliable at starting strong and finishing flat on their face. Their record is a mask to their ugly underside. Heck even the humble owner knows they suck - at least that's a step in the right direction.

Win one, lose one. If they can win against teams above .5 and lose against the lower .5 teams then they might make the playoffs. Dirk can barely play full games and the rest of the team cannot maintain any sense of consistancy. I hope a smart, talented, and young player replaces the late Hemp Howard. Maybe this year can be saved. Maybe.

Let's go over some sporting events and teams I watch, mk?

Texas Rangers
Another positively rough season is over. Pitching improved over the season but  faded with the batting towards the end of the season.

Dallas Mavericks
Old people throwing a ball around have yet another season to play. There's some nice rotations with the new players instead of the same ol', same ol' rotation, but there's no defence.

Formula 1
Decent season with interesting twists that was different then the previous year. Next season will be completely different as well. Maybe HD video feeds (if pigs fly) are coming soon. I would die a happy man after seeing a grand prix in HD.

College Football
Nuke the BS^H BCS. Favouritism helps no one. I'm looking at you USC.

Whoever thought the zone defence was a good idea should be shot. Everyone that believes it in today should be shot. Football plays are decided in milliseconds not seconds. When a defender is in a zone, it takes him seconds to react and move in to a tackle. By the time they react, the offensive player is gone. In other times, multiple defenders are standing around helpless because they had to stay in their zone to defend the precious grass that no offensive player would ever enter.

I do not think I could even be sarcastic about how awful zone defence is. Any football team, college or pro, who continues to use zone defence as their strategy will never have my support. Sure, I may have never coached a football team, or even played a game, but one does not need such experience when it boils down to common sense.

Texas Sports are Heating Up, Lame Metaphor, I Know

With the terrible start of the Texas Ranger's season, I had completely forgotten they existed. Then I happened to get wind of their miraculous turn around from a co-worker and decided to give them another chance. What's this? A Texas Ranger, Ian Kinsler, just happened to be on a long hitting streak. Something unusual for a Ranger.

Mavericks? Oh, the basketball team? Seems like things are shaking up. New coach and new, older teammates are not making me a happy camper. No chance of a playoff bout this coming year. Mavericks owner Mark Cuban is too busy trying to buy the Chicago Cubs or Pittsburgh Steelers. Stick to one team Cuban.

Last but not least, the Cowboys are not down and out. They have the promising line up from last year with some minor changes done. Hopefully their thugs-turned-straight will remain level headed and will stick to football. It's about time we have a preseason game.